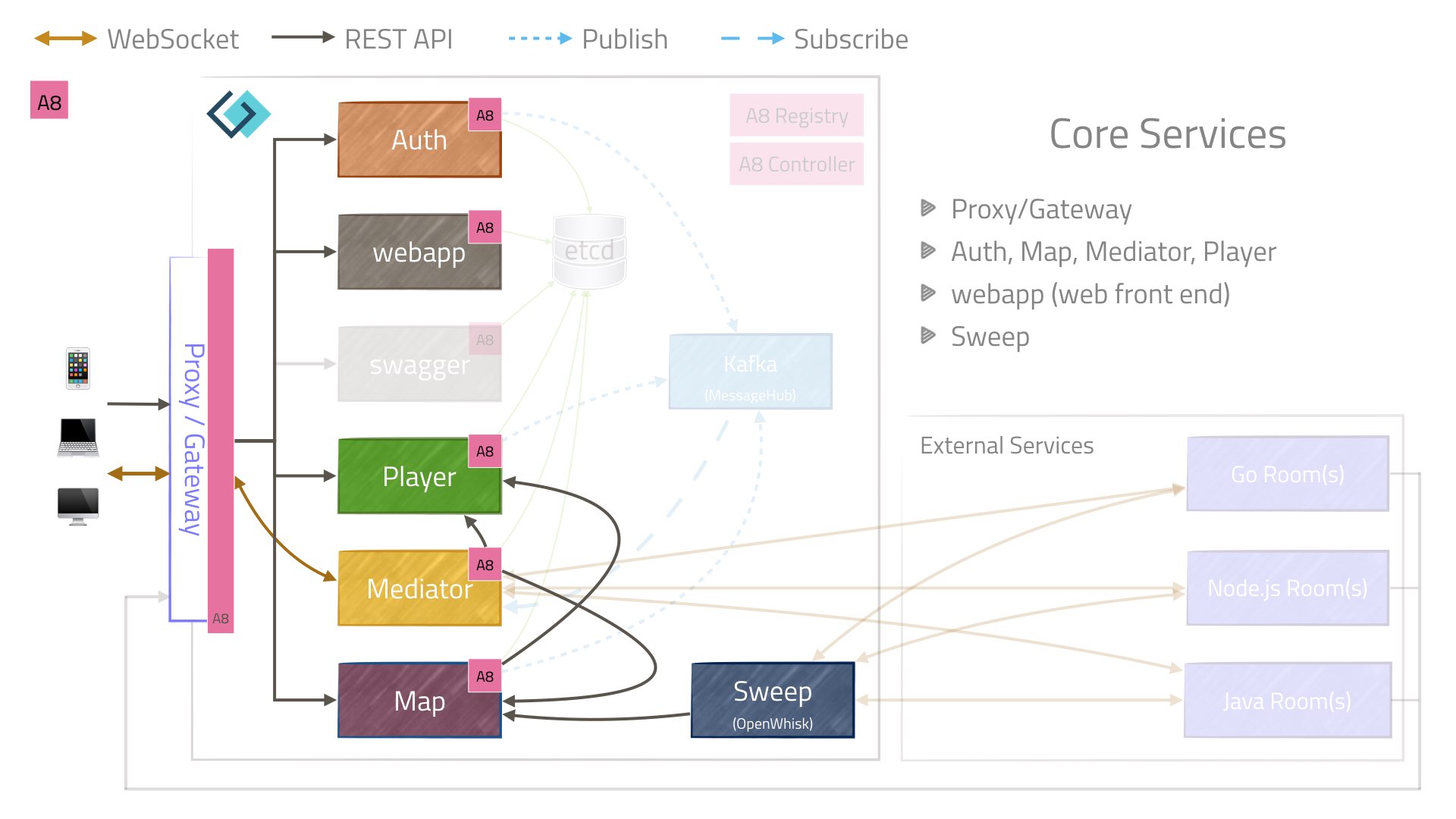 Auth is a very small lightweight authentication system. It allows players to connect and identify themselves via a selected "social login". We assume that the client (JavaScript running on a device outside of our environment) is not secure, so player authentication using OAuth is initiated by the Player service, rather than by the client/webapp.

This service used to be part of the Player service, when we considered the Player service to be looking after all things related to the Player. As the application grew in scope, and we added additional social login providers, it started to become clear that the Auth aspect of Player was deserving of it’s own service. This allowed us to separate and better manage the various library dependencies of the Auth code from the persistent store used by Player.

The Auth service hosts an endpoint per supported social login provider, and the flow goes something like this: the user (that’s you), pushes a button in the web UI to select an OAuth provider (Facebook, Google, GitHub, or Twitter). This button press sends an async REST request to the Player to initiate the authentication process. The Player sends a REST request to the selected OAuth provider using the proper credentials. Many redirects later, we get a callback from the OAuth provider letting us know that you authenticated properly. We then sign a JWT, which is passed back to the client/webapp.

Auth declares itself as an Amalgam8 service on startup, allowing it’s discovery by other services, such as the Proxy/Gateway. Currently Auth makes its calls to the social login services directly, but we plan to direct these calls through Amalgam8 to better enable testing, and simulate remote failures.

Webapp is a simple nginx process that serves the static files that comprise the front-end of the UI. The front-end is a single page application written in JavaScript that makes requests using standard/published APIs to interact with backend microservices via the proxy/gateway.

Having this as a separate entity allows our front-end to be changed and updated independently from other services. Some suggest that UI components should be provided by each backend service, which can be true with a UI built from distinct sections. The game, however, uses a more integrated UI, with much of the rendered data coming from a long-lived WebSocket connection using a custom protocol.

The webapp process has fairly simple scaling requirements, as it serves cachable static files. It is not (yet) an Amalgam8 service, but we plan to convert it into one in our next integration pass.

Players are represented by the player service, which provides a public API for CRUD operations, and for managing API tokens.

The Player service was one of the first to exist, and is implemented in Java using WebSphere Liberty. It stores data in either couchdb (local) or Cloudant.

The Player service registers as an Amalgam8 service on startup, enabling other services to find it, and allowing for scaling via additional instances if required.

Once upon a time, the mediator was part of the player service. It was split into its own microservice for two reasons: 1) the function it performs is not strictly related to the notion of a "player", and 2) it has drastically different scaling requirements.

After a user has logged in, a WebSocket is established between the user’s device and the mediator. The mediator then maintains a second WebSocket connection to whatever room the player is in. Maintaining two long-lived connections (even with asynchronous processing going on) will use resources differently than other kinds of REST or HTTP request processing.

To provide the best user experience it can, the mediator retains cached information about rooms it has visited, to ensure that players can move between rooms if the map service can’t be reached. It also provides a few special rooms itself (First Room, Empty Room, and Sick Room) to provide a good user experience in the face of badly behaved or failing rooms.

The Mediator service is implemented in Java using WebSphere Liberty, it does not use an external data store. As noted above, its API is a WebSocket endpoint with a custom protocol.

Mediator also registers as an Amalgam8 service, enabling proxy to forward traffic to it (including the WebSocket from the end user). Requests to Player and Map made by Mediator are routed via the local in-container Amalgam8 proxy, allowing those to scale as required.

First Room is the starting place for every player joining the game, and is also where players return when things go terribly wrong, or when they call for a rescue (/sos). It also provides a few special commands that room implementors can use to teleport to rooms that they own.

Empty rooms act as placeholders: they do nothing interesting, but are navigable to allow players to navigate the map even when there are holes in it.

Sick rooms are also placeholders, but they specifically stand in for rooms that exist, but are not responsive. They are a game-appropriate implementation of the circuit breaker pattern: detecting failures and unresponsive rooms, and preventing repeated access to those rooms until they have been restored.

The Map maintains a 2-dimensional grid containing all known (registered and empty) rooms.

The Map service is a Java EE application running on WebSphere Liberty that provides a public REST API using JAX-RS. It stores data in a NoSQL data store, either couchdb or Cloudant. Methods that modify the map require signed requests.

Map registers as an Amalgam8 service at startup, enabling Mediator and Proxy to find it and place invocations to it via their in-container proxies.

The Sweep performs periodic rounds of all the registered rooms, checking to see if they are still reachable, and that they behave properly according to the documented WebSocket protocol.

We have a single proxy/gateway that is haproxy based, and is responsible for surfacing the collection of APIs as a single facade for the entire application.

Today this proxy identifies services via url patterns, and where a request is made to an Amalgam8 registered service, the proxy will place that invocation via the Amalgam8 in-container proxy. This both provides Service Discovery, and Service Proxying, allowing the instances of the servce being routed to to scale as required.